The Best Way to Bring Money to Africa 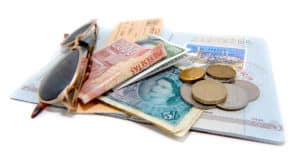 It’s a good idea to bring money in various forms, in case you get low on cash, there’s no place to change a traveller’s check, or a vendor won’t take a credit card. Below are some pros and cons of the various options you have when you bring your travel money to Africa.

I usually take my ATM/Debit card (cash card, bank card) and withdraw money as soon as I arrive, either at the airport or in town. I find withdrawing money this way carries the least amount of charges so I get more bang for my buck. It’s also good to learn how the bank machines work as soon as you arrive. You have to figure out how to get your money out (whether to press “credit” or “cheque”), and what buttons to press since they may be labelled in an unfamiliar language.
You should be able to find a bank in most African capitals that accept your debit card.
Beyond the major cities though, and some high-end hotels, you will likely be out of luck.

Don’t forget that bank machines can run out of money and they can sometimes eat your card, so don’t rely on your bank card exclusively.
You should also call your bank before you go and let them know you will be using your card in a foreign country. Sometimes banks will put a stop on foreign withdrawals for your own security.

Credit Cards
Credit cards are useful in major cities and luxury hotels but smaller establishments may not accept them. If you can use a credit card make sure you ask about the exchange rate and fees charged. Visa and MasterCard are generally more widely accepted than any other credit card. If you are travelling in North Africa or South Africa, credit cards are accepted much more widely.
Call your credit card company before you travel and let them know you’ll be using your card abroad. They will sometimes refuse a charge for your own security if it originates outside of your home country.
Travelers Cheques
Last time I got traveller’s cheques from my local bank, the tellers looked at me as if I was an alien. Nobody in the branch could remember how to sell them. But, traveller checks are still used and accepted in Africa because they’re safer than cash and can be replaced if stolen. The problem with cashing traveller checks is that you have to find a bank willing to do the transaction, and when you do, you can be sure they will charge a very hefty fee.
So if you find a good rate and you have traveller checks, cash a lot at one time.
You should get traveller cheques in either US Dollars or Euros.

Always carry some cash with you, American dollars are probably the easiest to use throughout the continent. Carry an assortment of bills with you and take into account that many countries charge airport fees in US currency and some national parks will only accept US dollars for their entry fees. If you are on a high-end safari, it is quite common to tip using US dollars as well, but in local markets and in general, try and tip with local currency. Note that some Bureau de Changes will only accept US dollar bills that have been issued after 2003. Some banks and hotels will also only accept bills issued after 2003 (they are much more difficult to forge).
I usually go to my bank before heading out on a trip and get nice crisp new bills to avoid running into any trouble. Likewise, don’t accept torn or old US bills as change, if you plan to use them while in Africa.

Carrying Your Cash in Africa

The safest way to carry your money while your travelling is in a flat money belt that you can wear under your clothes. Keep the money that you plan to spend that day in a pocket or moneybag that is visible. It’s much handier than grabbing under your clothes, and it’s also a useful decoy if you get robbed. If your hotel has a safe, keep your foreign currency, passport, and tickets in the safe and just bring some local cash with you while you’re out and about.
Always try and keep small bills and coins handy for tips and handouts. Whenever you think there’s a chance someone will change a big bill for you — go ahead and do it.

Exchanging Money on the Street

When you arrive in an African country, you may meet people who will try to encourage you to exchange money and will offer a better rate than that which the bank may give you. Don’t be tempted to change your money this way. It’s illegal and it’s also not a great idea to show someone all your foreign currency. There are very few countries in Africa now where the black market rate for foreign currency is vastly different from the official exchange rate.
Exchanging your money on the street is not worth the hassle or the risk of getting robbed or cheated.

Getting Local Cash Before You Go

There are certain African currencies you can buy before you go. It means you don’t have to stress about finding a bank at the airport — although this is sometimes easier than finding a bank in town. You can buy the South African Rand, Kenyan Shilling, Egyptian Pound, Mauritian Rupee, Seychellois Rupee, and the Zambian Kwacha. A company called EZForex offers decent rates for buying these currencies although I haven’t used the service personally.